The moment I received news that my brother Will had died, I was seated on my living room couch. I was 23. I was living in Santa Monica. It was a Saturday morning. My mom called.

I learned later that it was suicide.

In the months following Will's death, I was consumed by sorrow and filled with confusion. Occasionally, a pang of guilt or a burst of anger broke the monotony of grief, but, for the most part, I was simply and deeply sad. During these days, I cried randomly at work and regularly broke down while out with friends. My daily routine seemed pointless and my decisions and actions meaningless. The world, once an exciting, enthralling place, at times brightly sunny and times stormy, had lost its vibrancy.

I can never express enough my thanks to the friends, family and coworkers who showed me love during this time. Their support held me together when I felt utterly broken. For these individuals, I am deeply, completely and eternally grateful. With their help, I began to process and to heal.

Since Will's death in March of 2017, I have found that suicide is not a comfortable subject to address socially, even amongst close friends. I have found that most people shy away (*sprint away) from talking openly about suicide.

This social discomfort applies not only to suicide, but to all topics associated with mental health. Addiction, anxiety, bipolar depression, depression, eating disorders, obsessive compulsive disorder and self-harm (to name a few) are not openly discussed. Yet, 21% of adults are affected by debilitating anxiety disorders each year and depression affects 20-25% of American adults in a given year. Despite social reluctance to openly address mental health struggles, they are not uncommon. According to the National Institute of Health, less than 50% of adults with a mental health condition seek mental health services. Stigma far too often prevents people from taking strides to live fully.

Furthermore, I have found that many people (especially young men) struggle with expressing "negative" emotions such as sadness, shame, fear and guilt. These emotions, even when not discussed and/or addressed, are still felt. In neglecting to openly express these emotions, people experience them in solitude, leading to senses of isolation and hopelessness. When coupled with a recurring "negative" emotion, like sadness or fear, isolation and hopelessness can easily result in despair and, occasionally, in a tragedy like suicide.

I launched The Scooty Fund with my talented and insightful fellow board members in the hopes that we can change the culture around mental health and fight the stigma. If we learn to understand mental wellness as multi-faceted, value openness and honesty in interpersonal communication and non-judgmentally accept expressions of mental unrest and/or requests for emotional help, I believe that we can better support individual members of society. In doing so, we can, as a whole, lead more full, more rewarding and ultimately more joyful lives.

That being said, I want to thank you for your support, from the bottom of my heart. I am grateful for the incredible support we have received thus far, in the forms of both donations for mental health research/resources and cultural/social engagement. I look forward to all that the future holds and, on a personal level, I am deeply moved. Thank you.

There's a WILL and a WAY. 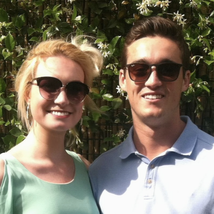 Pictured with Will "Scooty" Taylor